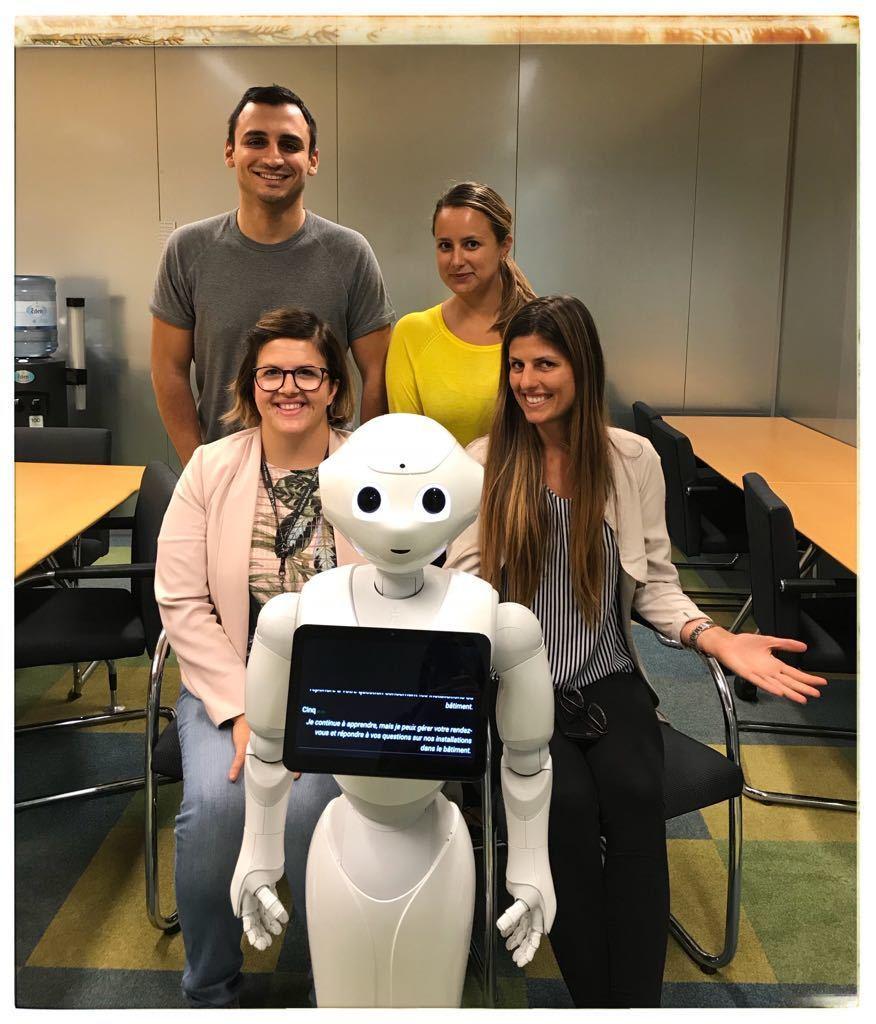 This case study was my graduation project at IBM Benelux in Amsterdam, the Netherlands.

I worked with two other students: one who programs the robot and another who generates robot’s gesture using machine learning. I worked mainly on the IBM Watson Assistant to design the interaction and conversation flow between the robot and the people. I was responsible for planning, executing and delivering a user study and usability testings as the pilot project. The result of the user study and usability testings were implemented as interaction improvements. I also presented part of the project during the Dutch Technology Week 2018 where visitors could talk and interact with the robot.

The robot would serve as a hospitality robot at the IBM’s office building. To better understand the existing interaction between the real receptionists and the visitors, a user study was conducted. The purpose was to identify their goals and needs, how they accomplish their goals, what they said to accomplish their goals, and gathering the most frequent questions asked to the receptionist as well as they key use cases.

The study was done with the receptionists in the company since they interact directly with the users on a daily basis.

I approached the head of the receptionists in the lobby while there was no visitor coming. First, I introduced myself and explained the purpose of the study as well as the procedure to the participant. The participant was given a paper to fill in the questionnaire anytime they have time and their answer would be picked up by the end of the day.

At the end of the day, I came to the receptionist desk to pick up the survey. The receptionists were also asked if they had any questions. All of the participants were thanked for their participation, and it was emphasized that their contribution was highly valuable.

The result of the survey showed that visitors, business customers and foreign employees were identified as the most common user types, while appointment handling, booking a taxi and asking for a building pass/badge are the most frequent users’ goals in the reception desk.

The most frequent questions including “Will you call Mr./Ms. …?”, “Can you call …?” or “We have an appointment with Mr./Ms. …” for appointment; “Can you provide me a badge?” or “I forgot my badge” for asking a building badge; and “Can you book me a taxi?” or “Can you call a taxi?” for booking a taxi. Other questions also answered in the survey were “Where can I find room…”, “Where is the toilet?” or “Where is the waiting room?” for asking certain location in the building; “I lost my …, did someone bring it?” for lost and found; and “What is the WiFi here?” regarding the facilities in the building.

Based on the result of the study, it was chosen that appointment handling is the main interaction for the robot, considering the practical limitations of the other most frequent users’ goals. Booking a taxi was not included in the interaction as it happens only after the users already have been inside the building. In addition, providing a badge is also not included in the interaction flow as it needs a real human to check the visitor’s id and to provide badge. Consequently, answering questions regarding the facilities in the building was chosen as the minor capabilities of the robot as well as to play a small quiz.

Robot: Hi, I’m Casper. Welcome to IBM. Do you have an appointment today?

User: Yes, I have a meeting with John.

Robot: Great! Could you please tell me your first name, so I can notify your host that you have arrived?

User: My name is Linda.

Robot: Thank you. I have notified your host of your arrival.

To note, since we use Watson Assistant as the medium for conversation, we needed to gather user utterances based on their intents and entities they provided. Intents are defined as goals that users will have when they interact with the robot and can be extracted based on users’ input. For example, the intent for above dialog was #appointment. Imagine what we would have said if we have an appointment. “I have a meeting with John”, “I have an appointment with John”, “I would like to meet John” or “I’m here for John” were sample user utterances that were employed as a first training data to be used in the dialog flow in Watson Assistant. To learn more about intent or Watson Assistant in general, please click here.

To test the flow of the conversation and the overall performance of the conversational agent, a user testing was completed. This was also done to see the possible errors that could happen when the complete solution was integrated and if the natural language processing works.

For the analysis, the log of the conversation for each participant was checked. For each user turn, the utterance was analyzed if it matched with the correct intent and if corresponds to the system utterance. For each mismatch, the user’s utterance is added to the correct intent as a sample. The dialog flow was also re-arranged to improve the flow of the conversation. This process was done for each participant’s response.

In this phase, Watson Assistant was integrated with the other IBM Watson services (Speech-to-Text, Text-to-Speech, and Visual Recognition) into the robot and ready for the real interaction with the robot. 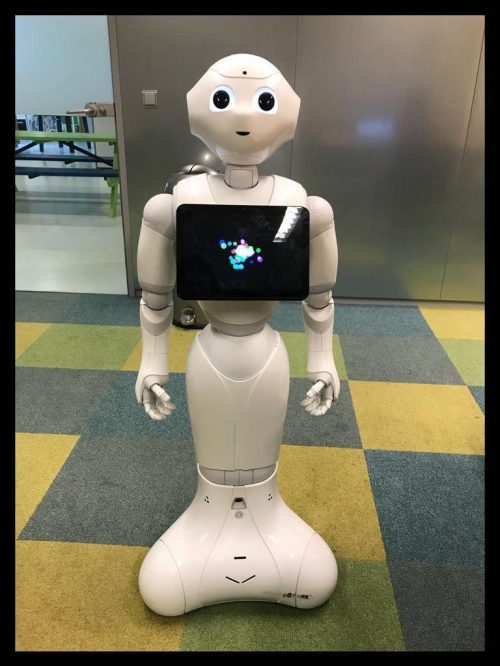 The study was a field study and the robot would serve as a hospitality robot at the IBM’s office building. However, the present study only performed the the first user testing phase or as a pilot experiment. This first pilot phase allows testing the integrated system with participants, including all software modules and dialog used for the evaluation. The purpose was to see if the overall systems works as expected, whether people understand how to interact with the robot and to see possible errors in dialog or interface. 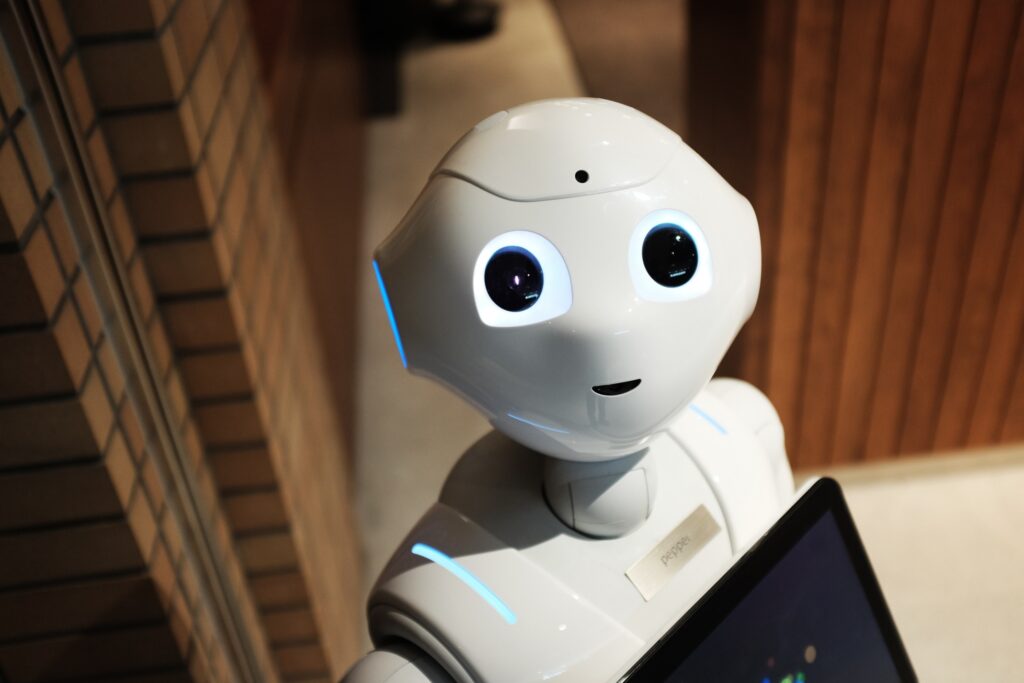 The participants were IBM’s employee. In total, 39 people participated in this study. They were contacted by personal connections and the sample consisted of people who are most easy to reach. The number of participants was also based on a convenient sample. Those people were not necessarily novices. There was also no need for this requirement since the objective of this study was not to identify the interaction of first-time users with the robot. However, 16 out of 39 participants reported that they had no prior experience with the robot.

The experiment took place at IBM Benelux office in Amsterdam, The Netherlands. The robot was placed in one of the meeting rooms in the office. The location of the meeting room was varied due to the convenience of finding the participants. A laptop was used to provide the link to fill in the robot evaluation questionnaire at the end of the experiment. The questionnaire was built using LimeSurvey. A mobile phone’s voice recorder was also used to record the conversation between the participant and the robot. All the speech said and heard by the robot were shown on the robot’s screen so people can use it as a guidance or fallback option of the ongoing interaction. 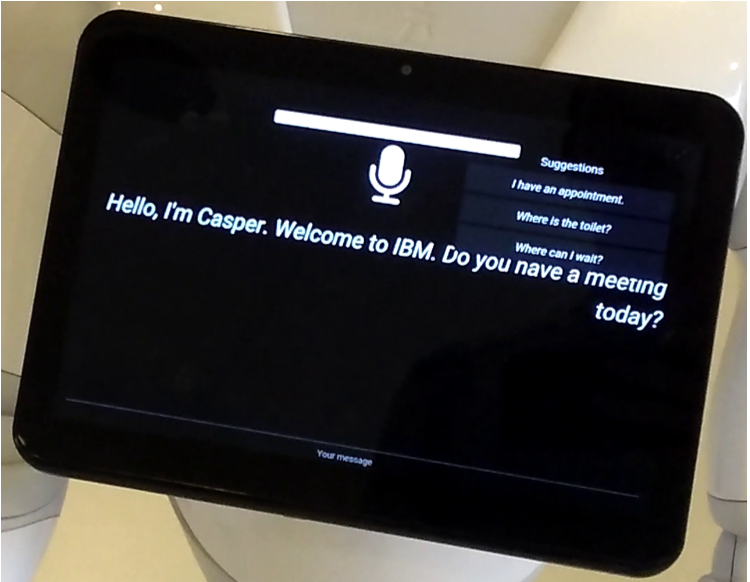 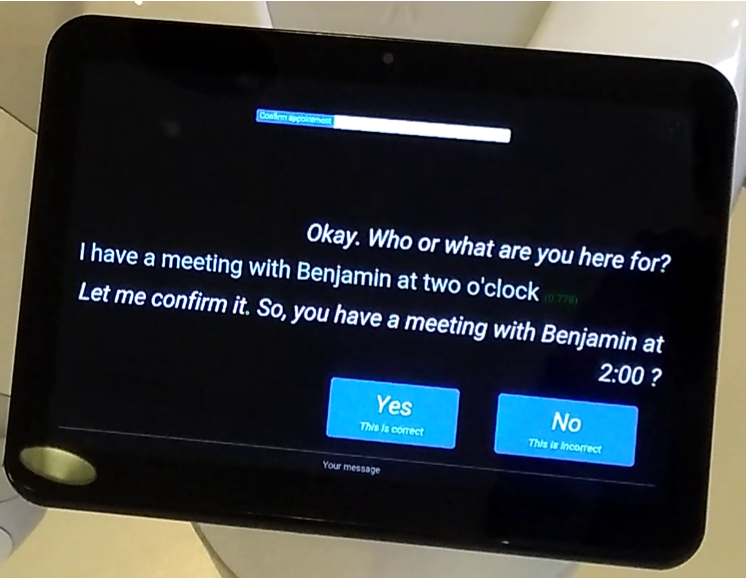 The Godspeed questionnaire (Bartneck, Kulić, Croft, & Zoghbi, 2009) was used as dependent variables to measure people’s perception towards the robot. However, the composition of the questionnaire presented in this study was adapted based on The Robotic Social Attributes Scale (RoSAS) questionnaire (Carpinella, Wyman, Perez, & Stroessner, 2017). To check the manipulation, “Did the robot understand what you said?” was asked after the robot’s perception questionnaire was presented. The questionnaire used a 5-point Likert scale to indicate how often the robot understood participants’ utterances, from Never, Rarely, Occasionally, Frequently, and Constantly. The users’ prior experience with the robot was also checked. “I work with humanoid robots on a daily basis” was asked with 10 points-scale, with 1 as Not at all and 10 as I work with humanoid robots on a daily basis. See Appendix B for the complete list of the questionnaire. Participants were also asked two questions after the experiment: “What do you think of the interaction?” and “Any suggestion for improvement?”. The purpose was to assess their verbal evaluation of the interaction with the robot and to seek suggestions for the improvement of the complete solution since this study was the first testing phase.

In addition, the objective measurements were also collected such as:

After the real testing, the participants were asked to evaluate the interaction as well as any suggestions for improvement. Then the robot’s evaluation questionnaire was presented. 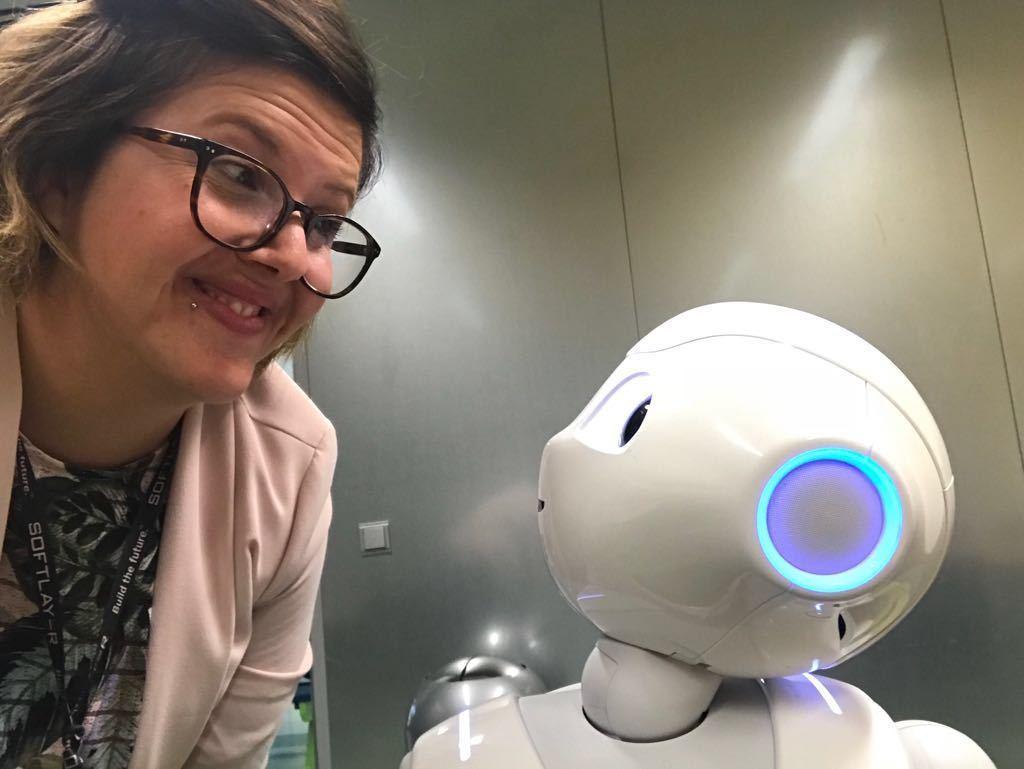 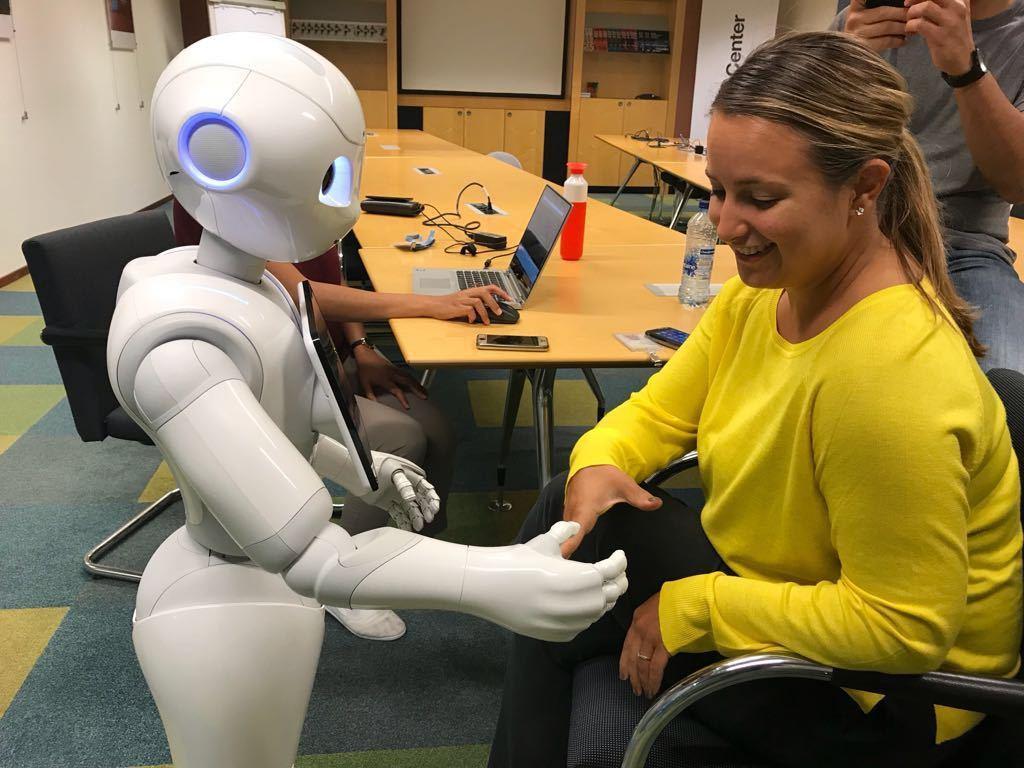 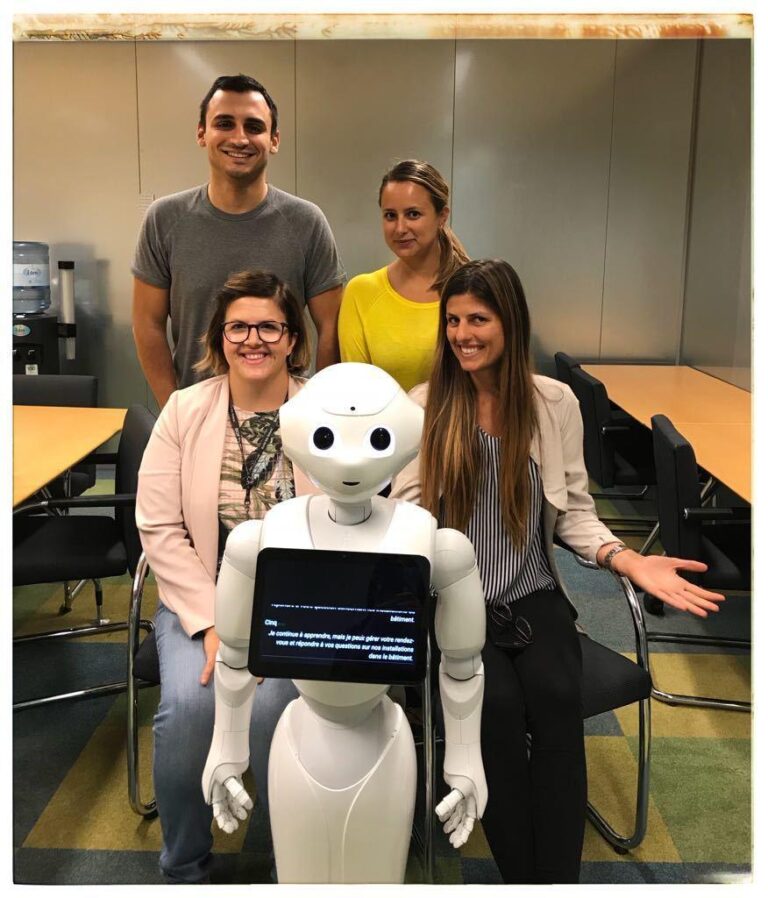 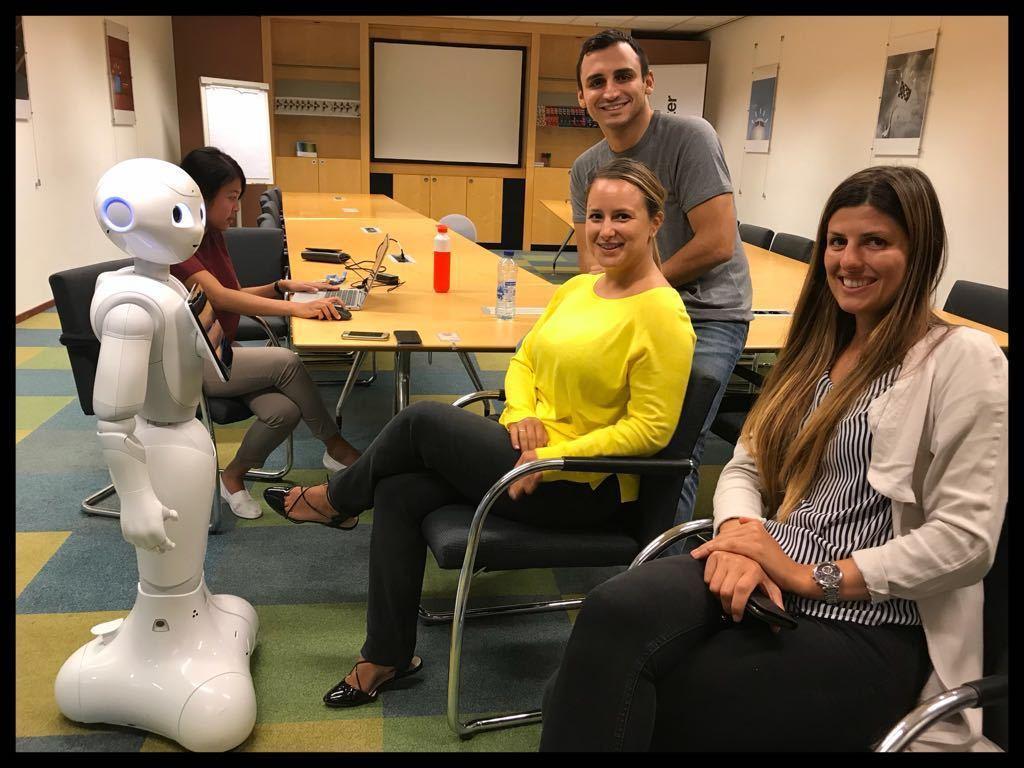